In memoriam of John F. Schonder 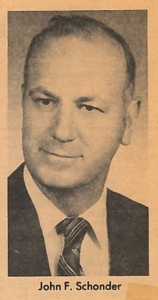 John F. Schonder, former Principal of RSSC Architecture, passed away at his home on Thursday, May 13, 2021, at the age of 89.  We at RSSC Architecture celebrate his contributions to the community and the firm, as well as offer our deepest sympathies to the Schonder family for their loss.

After John graduated from Carnegie Tech, he began his architectural career with Altenhof & Bown and continued practicing at Deeter Ritchey Sippel.  In 1972, John partnered with Jack Ross to start the North Hills firm of Ross & Schonder where he continued as a Principal there until his retirement in 1996.

John played an integral part in growing the firm from the initial two people to an architectural firm with over twenty staff members.  His strengths in leading the production of Construction Documents and Construction Administration provided leadership and valuable mentorship for the younger staff.

With a calm and deliberate demeanor, John was successful in dealing with clients and contractors during the construction process.  With extensive and varied project and clients types, including corporate offices and production facilities in the RIDC business parks, medical and hospital facilities in Pittsburgh and Butler, municipal projects, and church / religious structures,  John has left a legacy throughout the Greater Pittsburgh region.  He was also active in serving his Community, Church, and the Glenshaw Kiwanis Club.

John’s dry sense of humor, coupled with his client-centered work ethic, were fundamental qualities that contributed to establishing RSSC Architecture as a successful firm.